Sophie Harris-Greenslade The Illustrated Nail will be treating customers to exclusive nail designs based on Raf Simons’ spring/summer 2013 creations. 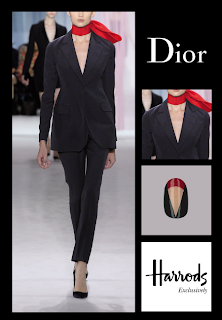 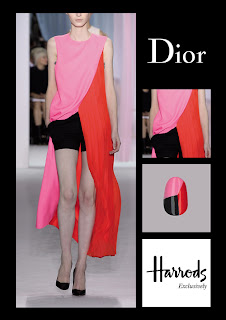 Two limited-edition Dior Vernis nail colours have also been created especially for the event – the pale pink Diorling and the metallic grey Windsor.
Read more about the Dior at Harrods event on Vogue here…
To see all the looks click here. 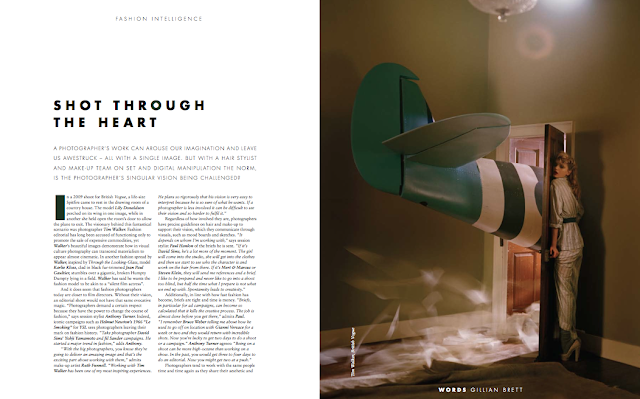 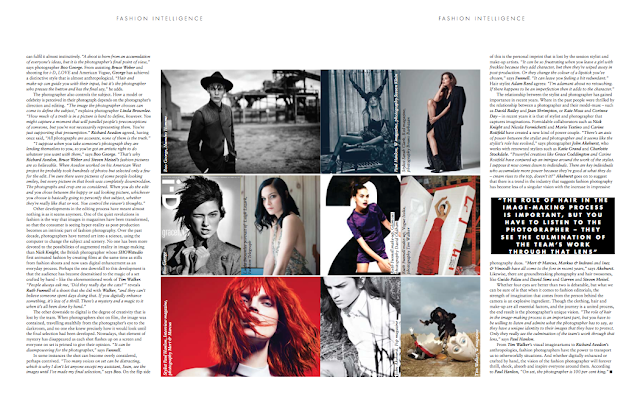 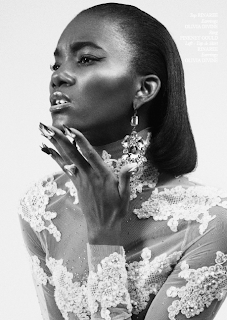 For this beautiful editorial by Hollie and Grace Carlin in Institute Magazine I made sculptural 3D nails to look like pieces of nail jewellery. 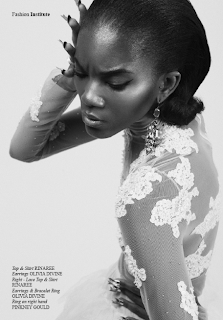 I filed the nails to a sharp point and covered in gold metallic Minx. I then cut folded and shaped gold foil to sharp points and attached to the nail.

I think the nails make a great statement and I absolutely love these shots. It was a great team to work with and I had so much fun shooting that day. 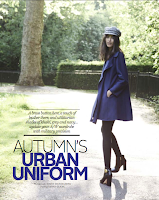 Eli and Sarah worked on the make-up and styling respectively for the Autumn’s Urban Uniform story in the September issue of Red Magazine with the photographer David Mandelberg. 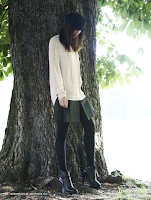 Sarah: “I really loved the Topshop Unique show back February (in fact, it was one of my favourite London shows). I never thought a Topshop show would provide the inspiration for one of my shoots, but with Kate Phelan at the helm, it was a very different show.

I loved the way she deconstructed the military looks to make them cooler and more wearable. I thought this was a great take on the (huge) trend for Red – not too young or gimmicky, but still stylish and cool.

I wanted to style the clothes in a way that was really effortless and easy for every day (but without being boring). My favourite pieces were the Topshop coat (amazing, although not sure I’m tall enough to pull it off myself), the Margaret Howell navy wool cap, and the Joseph skirt. And I was also completely obsessed with the Pringle boots! 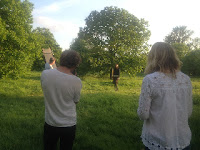 I wanted to shoot the story in a really simple location, (and definitely didn’t want any military references), and I just love Hyde Park. It’s so beautiful, and so photogenic. So we shot one day there and one day around the streets in Shoreditch and Brick Lane (to balance out all the green!).”


Eli: “We had such a lovely location shoot, a day out in both Hyde park and  in the East end of London.

Our model Claudia Raba at Models 1 was well cast to do this shoot which needed someone cool, effortless and stylish.
She was all that before I started make-up!
The make up was totally aimed to do just that as well, nothing too ‘statement’, just beautiful skin and with her gorgeous smile just shined. And showing her independence and determination by filling her eyebrow well.
All colours were in the pallet of urban tones, well worked into the skin. 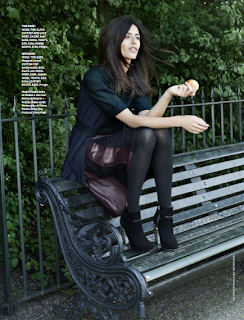 I used  Dior skin Nude as a base. 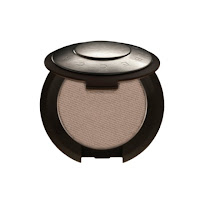 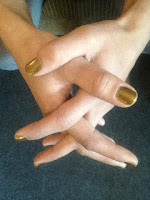 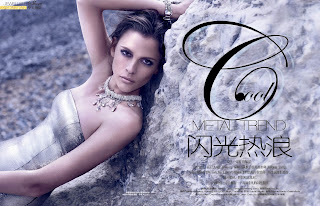 For the Harpers Bazaar shoot I woke up super early to catch the bus to Dover for the day. We all headed off about 6am to the beautiful St Margaret’s Bay in Kent.

I used Orly dazzle, a really beautiful silver foil effect colour and also an icy blue, Coat Azure by Essie to work with the “Cool Metal” story. I changed the blue however in the afternoon to a natural cream (Nigella by AFNB) as we thought it would work better in shot. 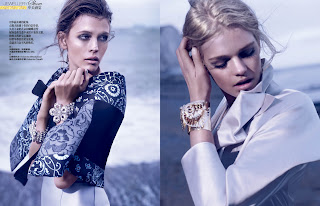 It was a freezing cold day and the sea winds on the beach really cut through you. I don’t know how the models got through it! Unfortunately the weather turned from bad to worse and poured down in the afternoon but the pictures are so beautiful it was well worth braving the cold for.

Sarah Clark has created Little Spree, a blog for children’s clothes featuring cool, stylish bargains for little ones (from newborn upwards…) trawling online and the high street so you don’t have to.

As a Fashion Editor for over 10 years, Sarah knows something stylish when she sees it, and she also has a keen eye for a bargain. She said, “When I had twins in January 2010, I found it harder than I thought to dress them well, without having to max out my credit card. There are great things out there that don’t cost the earth, you just have to know where to look for them (and be prepared to hunt!). But that’s my job. I score the high street for the best things out there (and trust me, if it’s out there, I will find it!), so you don’t have to. All you need to do is log on. Easy. Oh, and there are also loads of great gift ideas (so that’s all your friends’ kids/nieces/nephews/godchildren sorted too).” 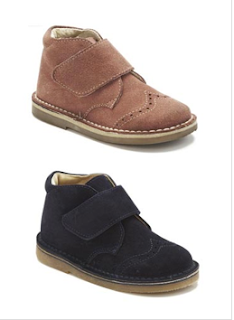 31st May 2012
1 week in Beijing! 2 days makeup fittings, 1-day rehearsal, and then the show!
195 models Total (60 male models/ 135 girls) including lots of new and exciting Asian girls with the most Amazing skin!

Linda Cantello heads the team…organisation is key and a solid team is paramount. Signor Armani is meticulous about detail and has to over see everything. Speaking Italian is a bonus as I am able to translate and convey to Linda what Mr Armani is feeling for the makeup“look” for the show.

The fittings go really well and we have decided on 2 looks for the show. The show is divided into 3 categories, Emporio/Giorgio and prive (couture) running time approx 30 mins it will be circular runway and the different sections will be blending into one another. Finishing with a live performance from Mary J Blige.

The atmosphere is electric back stage and we are all being filmed for a live “backstage stream!” no pressure!. Everything is very organised and models are given name tags showing which is their section so everyone is on the same page.
Call time is midday and the show doesn’t start until 9pm, longest call time ever! But needed as so much to do. As we had already done our makeup demonstrations the day before the team was primed and ready to go! Including the GA face designers we are a  30 strong team of makeup artists and ready for action!.
Emporio & Prive look.
This look was very technical!

Very graphic eyeliner along the lash line, which had to be, applied at just the right angle & thickness! We had been out the previous day to source a product that would not smudge and would stay put for the long wait before the show. False eyelashes, which we also sourced, were also applied which exaggerated the lash line. Beneath the eye a less graphic & smokier line was added which had sections removed in the centre and the outer corner of the eye

This look was organic

Light shadows were applied to the eye area, almost emulating a western socket without it looking like makeup but more abstract. This wash was taken around the outside of the eye and down too the lower lashes a little black kohl pencil was also added to the inside of the corner of the eye to give depth. No masara, or contouring was needed & little if any lip balm was added. 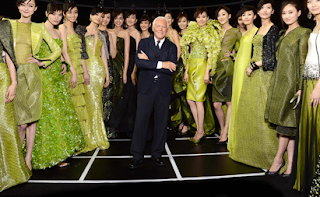 Beijing /China is where it was at..the buzz is astounding and everyone was ready for this Armani extravaganza, including Tina Turner and so many other VIP guests. The stage becomes alive with a Beijing moving skyline projected onto it & the occasional garment detail or close up beauty shot for all to see. The haunting then thumping music starts and the models stride out in all their glory, things come to an end with a statuesque style traditional dance with a model wearing a green dragon gown. Mr Armani takes his bow…What an amazing thing to be a part of. Now Lets Party!!

See it for yourself on youtube or facebook/Armani.and let me know what you think?

I was excited to attend the Spring/Summer 2012 launch for Shu Uemura last week and meet the amazingly talented creative designer Kakuyasu Uchiide, who worked alongside the legendary Mr Uemura himself for more than 20 years.
It was really great to see him at work and understand the philosophy behind the brand and to see his unique approach to colour and application of his makeup on the face. 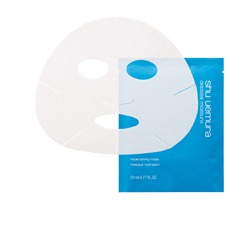 One product that really stood out and amazed me was the New Face mask which just felt incredible – it is unlike any other product out there.

There are 6 in a pack and they can be used like an intense facial before a night out or when the skin is feeling fatiqued and needs brightening and lifting.
They can be left on for as long as you like,but 20 mins minimum is ideal.
They don’t need to be washed off, you leave the product on so that it sinks in and just make sure to add a moisturiser on top to seal all the goodies in!
Just be careful not to open the door to anyone whilst wearing it 😉 !
Look out for June’s launch of Shu Uemera Silky Quad eyeshadows. The pigments are incredible, which is synonomous with Shu Uemura .
‘What you see, is what you get’ in terms of pigment colours, when applied to the eyes. The exciting range of colours are endless and inspiring but these quads are beautiful as they are both sheer, strong hues and then an irridescent complementary 4th colour to layer over top or wear on their own.  The purple palette is particularly beautiful.
Also to mention is the Semi Matt lip colours are equally exciting as they leave a semi matt finish but go on creamy and soft and with no dryness in sight- very wearable. Go and check them out… 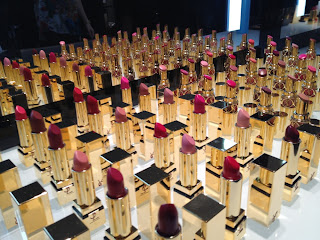 YSL is always a favourite of mine to attend, to see new products. Everything they do is so beautifully packaged and feels luxe and decadent and you just want to put them straight into your makeup bag or clutch, and go out for the night !
The new product that is very exciting, is their range of all in one High Gloss Lipstains. They come in an amazing choice of 19 colours and so there is something for everyone, from fab reds, fushias like No1 which is a deep classic YSL purple fushia  through to soft beiges and pinks. You apply them by building up the intensity and gloss you require by layering with the sponge applicator. 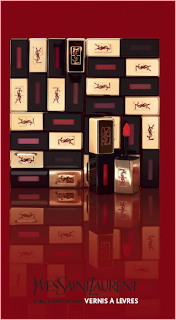 The staying power is incredible -you need to remove them with their Top Secret Eye Makeup remover as the stain does not budge for many hours.
The other products that are new this season are the Pure Chromatics Eyeshadow palettes [6 different colour sets] -beautiful deep tones with metallic shot through them -everything you would expect from YSL in terms of texture and jewel tones.
The colours are so rich and gorgeous that they are shouting out  to be used on an editorial shoot straight away!….. 🙂
GO TO AGENCY SITE